So, like everyone around the world, I am stuck indoors, with nowhere to go, due to the current coronavirus.

Nearly 1 year ago today, I removed all the Gen 1 (24KWH pack) cells out of my purchased fazer conversion. I bought the bike from a guy who had already converted it.

Shortly afterwards the Kelly controller failed quite catastrophically. I have since replaced the controller (twice) and have dialed in the settings so its a little bit more reliable, and a little bit slower unfortunately.

The old cells have gone into a Vectrix VX-1 (along with a few others) to give that bike a new lease of life.

With the old Gen 1 cells, this bike had a max bus voltage of 106.7 volts and a top speed of 65MPH. The range was roughly 38-45 miles depending on how you rode it. logging the charges, it turned out the bike did roughly 1 mile per AH which made it pretty easy to calculate.

Now, I am putting in 7 Gen 4 modules. (see my other post for details on this). These modules have twice the energy density, so once installed, will have a total pack capacity of 11.5KWH or roughly 105AH at a fully charged voltage of 116.2V. I am hoping this will give a range of roughly just over 100 miles!!

A big hurdle was the fact that the new modules are twice the size of the old modules. This meant finding space for the “top”. Although you can fit them all in like this:

Turns out, you cannot fit them in like this once the battery box is taking up space, as its short roughly 15mm at the top! Argh. OK. The batteries do need to be clamped and also must be in a water tight box (for obvious reasons).

After lots of mockups and fiddling, I ended up cutting the frame rail that sat near the base of the fuel tank and made up an aluminum box of its own for the 7th module. The 7th module would also be rotated so it was transverse compared to the other modules.

Whilst this method added more wiring (read losses), it was the only way I could get the additional cell in, and I did not want to loose the additional top speed the extra pack would give (and the range!)

After wiring, sealing, relocating the contactor and inserting a mid pack fuse (red box) I had something resembling the bike I took apart a year ago:

Whilst this worked, I would prefer the vehicle to have its own 12v battery as it would simplify the wiring somewhat. It would also give me some space in the tail for faster chargers. So I removed one and kept the larger one. I then installed a very small (6ah) SLA battery in the tail by the rear lights. The main 12v system is powered by this and is charged by the DC-DC converter at 13.5v whenever the master switch is on.

This also gave me the benefit of an always on 12v sytem for things like alarms, balancing systems etc, and also stopped the trip meter resetting every time you parked the bike.

Here is a test of the charging system, a modified Huawei DC Power supply (I will do a more indepth post of this once tested at 5KW.

This setup with a Kelly KLS96601-8080I will run at approx 280battery amps, which is roughly 30KW Peak. I do have a KHB that can deal with 1000Phase amps for 30 seconds and 600Phase amps continuously, that should be able to push the Enetrac 602 up to 40KW or so quite nicely 🙂 I am running it at the moment on the consertative side to ensure it works reliably.

I am using a coloumb counter as a battery gauge and a Cycle Analyst to be able to gauge riding efficiency etc. The chinese supplied coloumb counter is pretty accurate compared to my 500,000 count Brymen.

Still a fair amount to do to get it fully running, but the bulk is done. I will post another update when I have more complete.

I recently acquired a Vectrix VX-1. It had its original 125v 3.7kwh NiMH Battery pack. It did actually function, but had an approximate range of around 20 miles. Not suprising condisering its “new range” was 50 odd miles.

I have removed the original NiMH batteries and have replaced them with left over GEN1 Nissan leaf modules from my fazer 600 + another 6 modules.

This gives a total of 19 modules, or 38 effective cells in series, or a theoretically fully charged pack voltage of 159.6V. We will only be charging these cells up to 4.15V and down to 3.1V to give them the longest lifetime, so our max pack voltage should be 157.7V

The packs fit nearly perfectly in the Vectrix. The modules have 4 holes in them, and the most common way to mount them, is to run threaded rod down the packs and clamp them together with plates on either end. The cells do need to have an amount of compression on them, otherwise they will expand with heavy current draw and their capacity will be reduced. However,once installed,there is no way to get the batteries on their rods (unless you reduce the number of modules 2-3). The best way would be to build the module up and then lower it in. This requires the use of an engine crane, or 2-3 strong people and chains etc. My alternative is to use 4mm stainless steel wire, and crimp on threaded connections.:

Here is what they look like, mocked up in the vectrix: 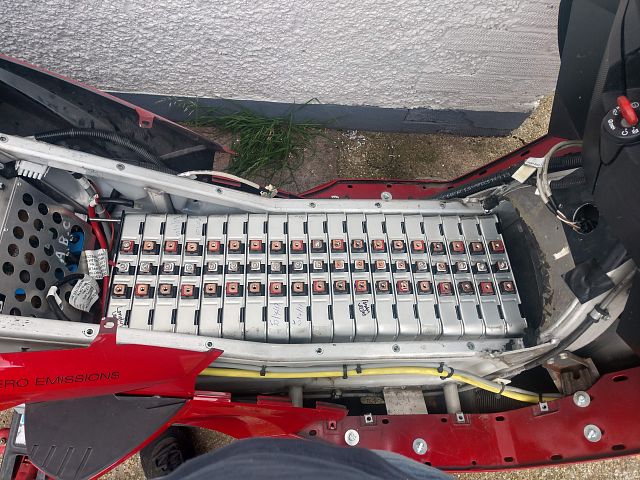 Here are the old NiMh Cells removed. I may try and repurpose this as a solar storage or something, but I do need to test their actual capacity. 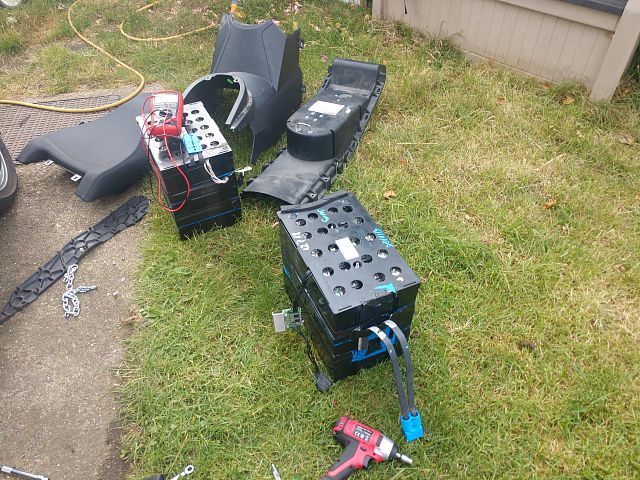 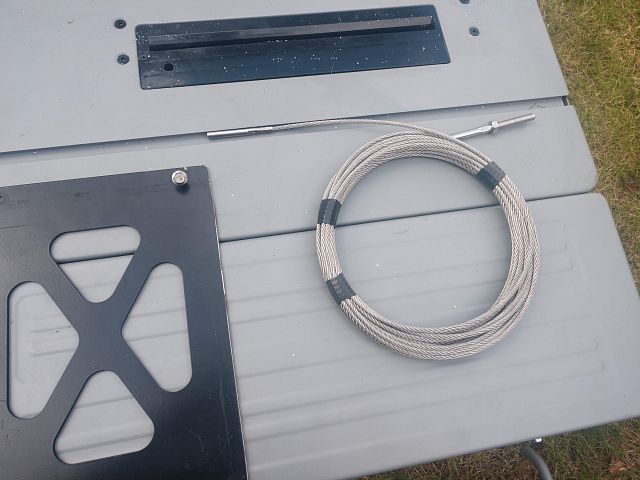 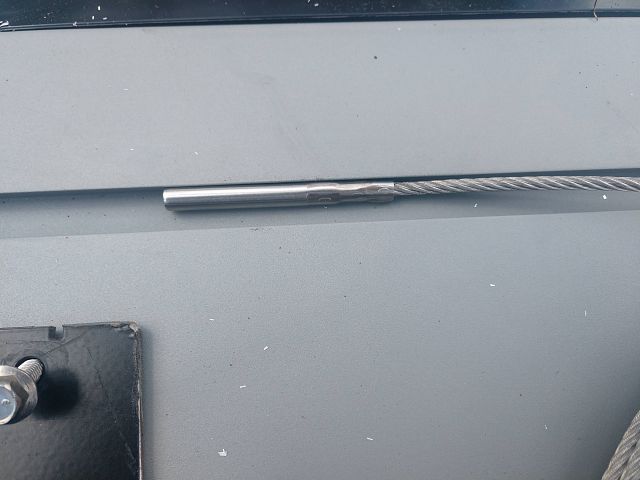 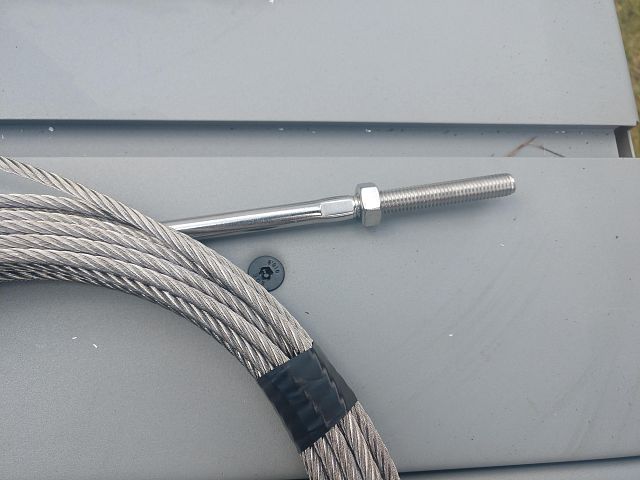 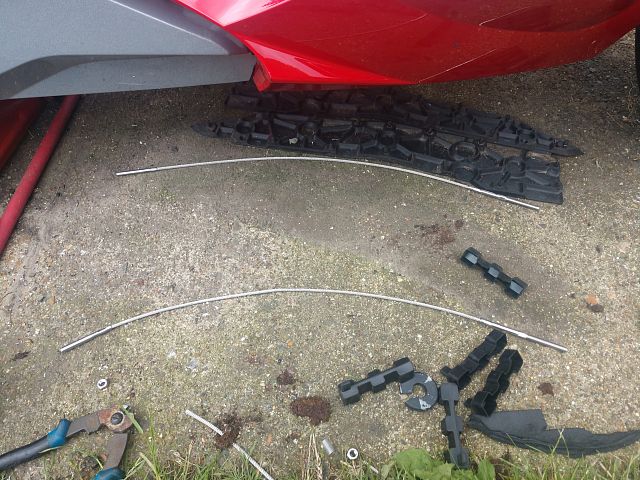 This allowed me to mount all the batteries in the battery tray, then thread the link through all the batteries one by one, with the end plates in place, you can spin the nut on the end and tension the packs up. This only allows you run the wire through the top two holes, so it is a compromise, but it does allow you implent some type of clamping force onto the packs. I then placed rubber blocks on the back and front to prevent the whole pack moving forward or back under braking etc.

Now we must ensure the pack is balanced before we connect each module in series with the next. I am top balancing this pack by charging each cell pair to 4.1V. My experience is that the modules will stay balanced by themselves, but we will include a balancing lead to all cells so that we can monitor this externally. There will be no active BMS on this cells, by keeping the max cell voltage to 4.15 and min to 3.1, they are less likely to go out of balance. If they do, a full pack charge is unlikely to get cells past 4.2v, but we will need to balance them every 5-600 miles, using an external balancer.

This is a bit of a slow process, but is necesary: 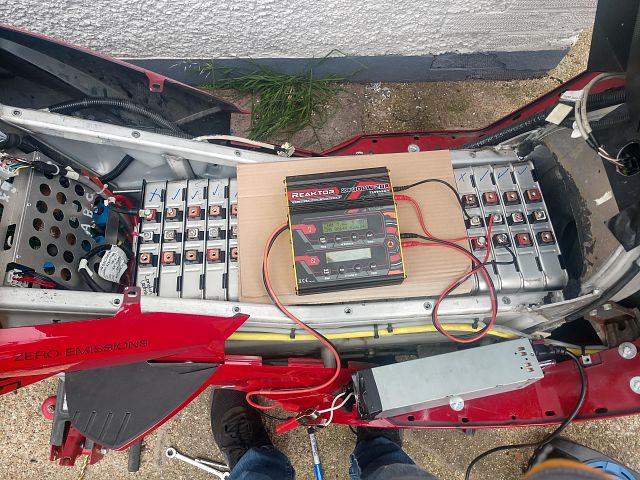 The bike has been converted for 6 months now,m and has done roughly 500 miles trouble free. I am hoping to get some more time to ride it, although not in the current lockdown 🙁

I have now developed an integrated BMS system and offer a full conversion service through my garage. Visit www.amfmercedes.com for more information.

I have carried out capacity tests for two types of Nissan leaf modules. 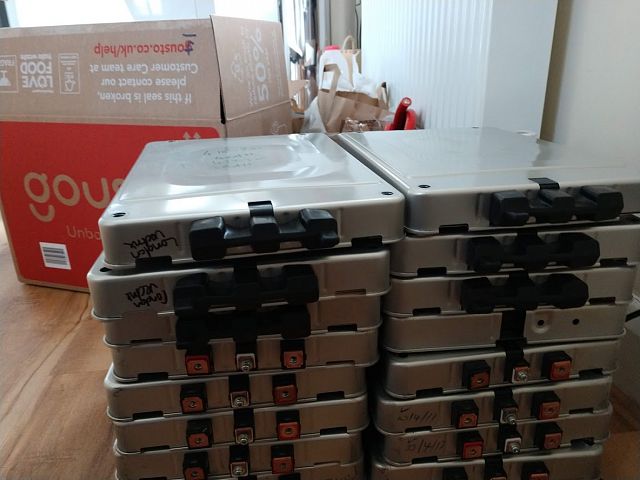 Despite multiple cycles, all I could get was 47.39 AH out of 2P Cells. These packs have approx 800 cycles on them. 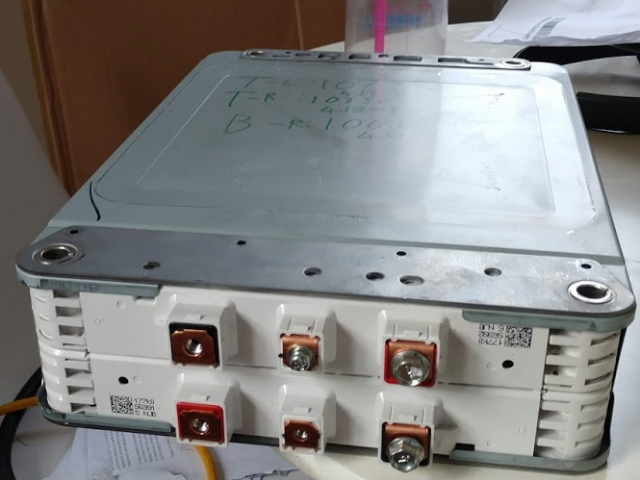 The best I could get out of these is 105.7AH out of 2P Cells. These packs are essentially new.

Very impressive! Nearly 2.5 times the capacity in the same space. The voltage sag seems to be a bit better too.

These new packs will go into the Fazer and should give it a 85+ Mile range.