I have recently been thinking of removing the Catalytic converter on my Mercedes E320 CDI W210. Primarily I wanted it for the sound,

but additionally, I have a hissing on boost, and I had been advised by a good Mercedes Tech, that this can sometimes be due to a blocked pre-cat (after I had checked for boost leaks, of which I found none). So I set to work removing the cat. Note, this process is similar on most cars. There is no worry about MOT testing as diesels are only tested on smoke output and not hydrocarbons and CO2, which is what a cat affects.

(also note, I had previously removed the backbox to install a straight pipe)

Step 1 – Jack the car up, and place it on axle stands:

I drove mine half onto the curb, and jacked the other side up to get a bit more space (naughty I know but meh)

Step 2 – Remove the bolts on the centre clamps on the exhaust. This isnt needed if you are just doing a pre-cat removal, but as I had to repair one of my exhaust tips I removed the whole system anyway. 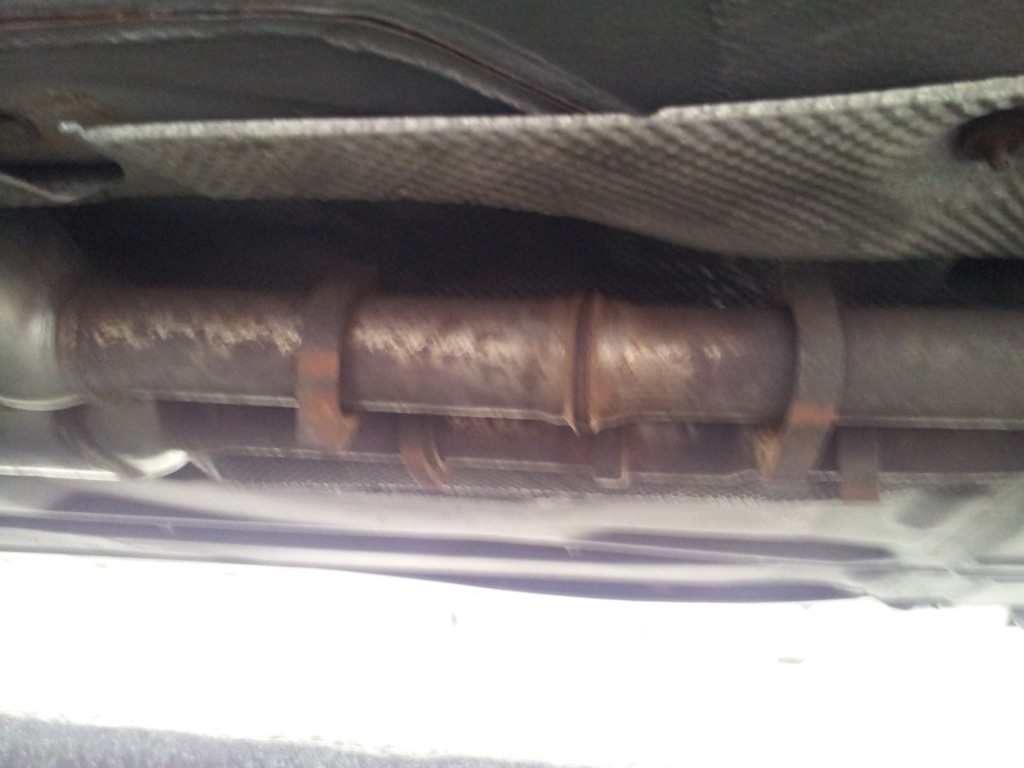 To get to the Primary cat, we need to remove the air box, Firstly remove the engine covers, then remove the primary air filter cover and unit (it pulls off from the rubber mounts that are bolted to the engine block. 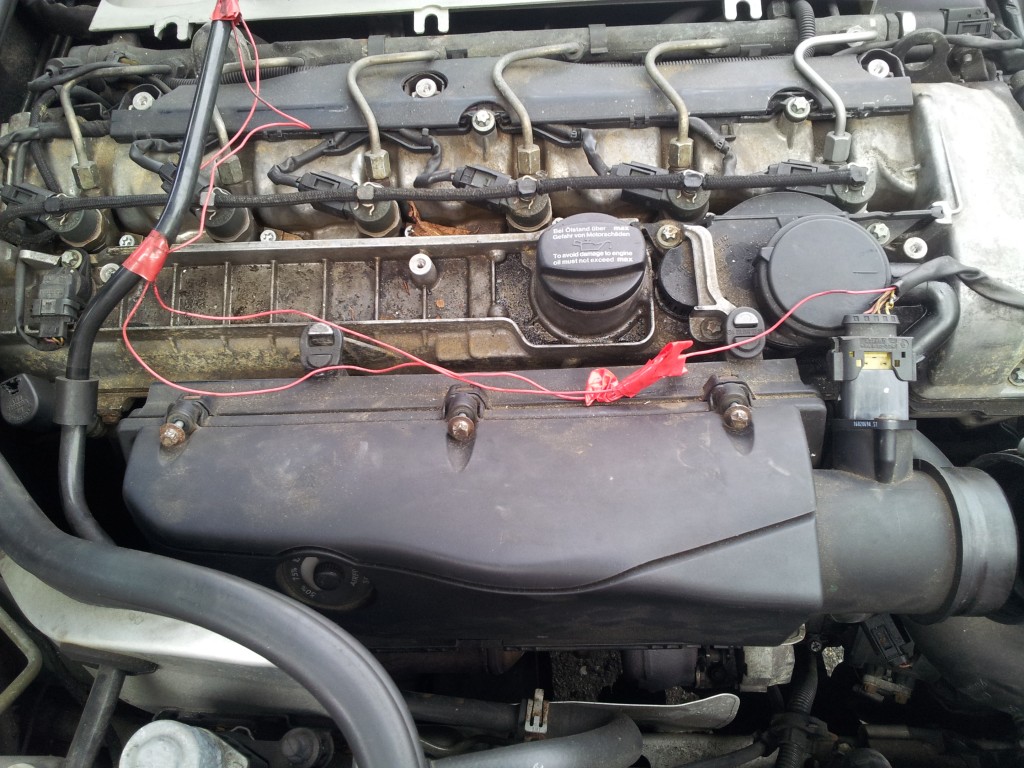 Ignore my crappy EGR-Shunt wiring, One day I will tidy it up!. Remove the air filter cover, MAF connector and unbolt the air pipe that goes to the turbo from the side: 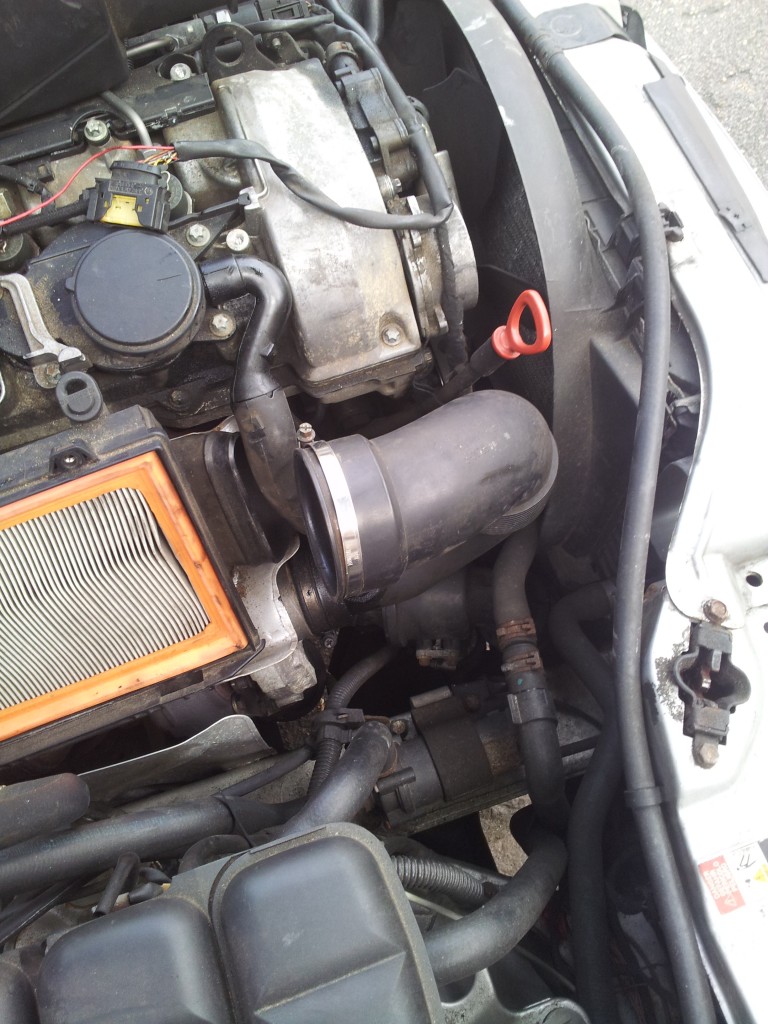 Remove the air intake pipe that goes from the grill area to the filter. 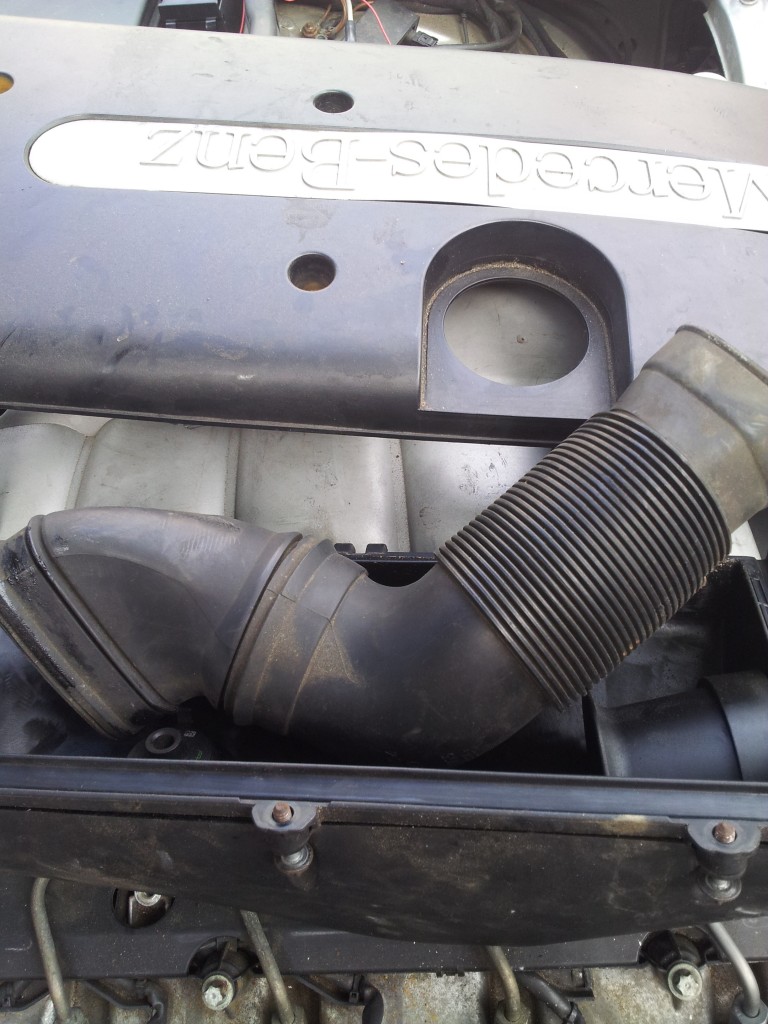 With the air box removed: 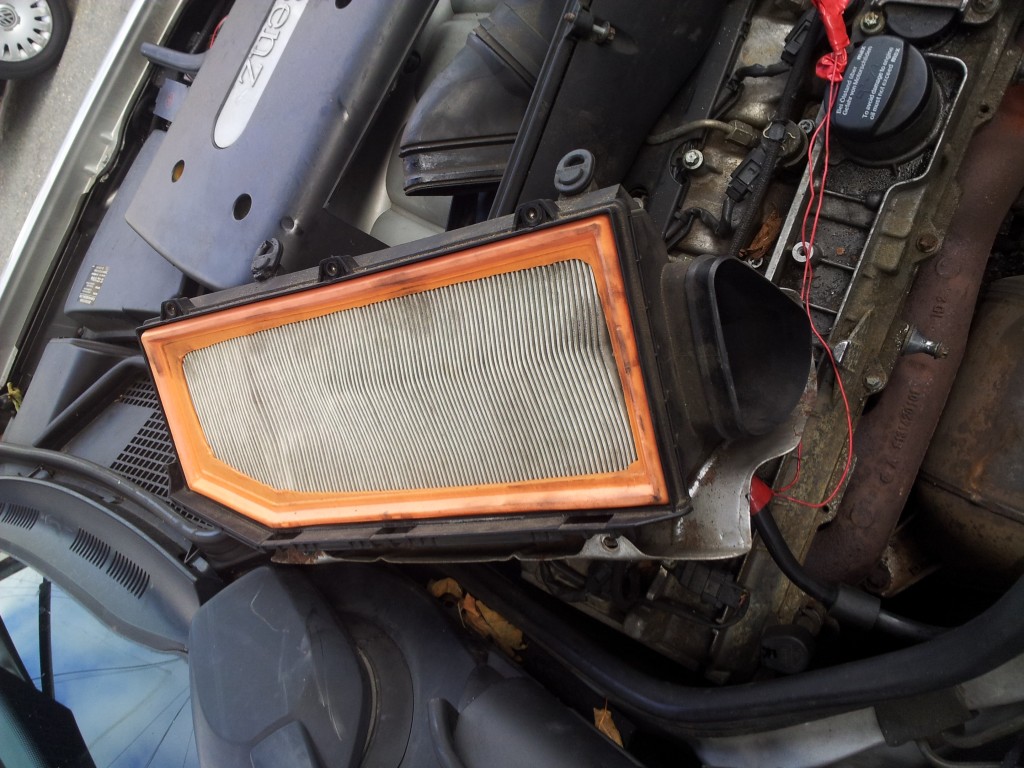 You will be presented with this:

Un bolt the bolt on the exhaust clamp and expand the clamp and place to one side:

Also, unbolt the mounting bolt that hold the cat there, This was quite rusted on mine, I had to get out the impact wrench 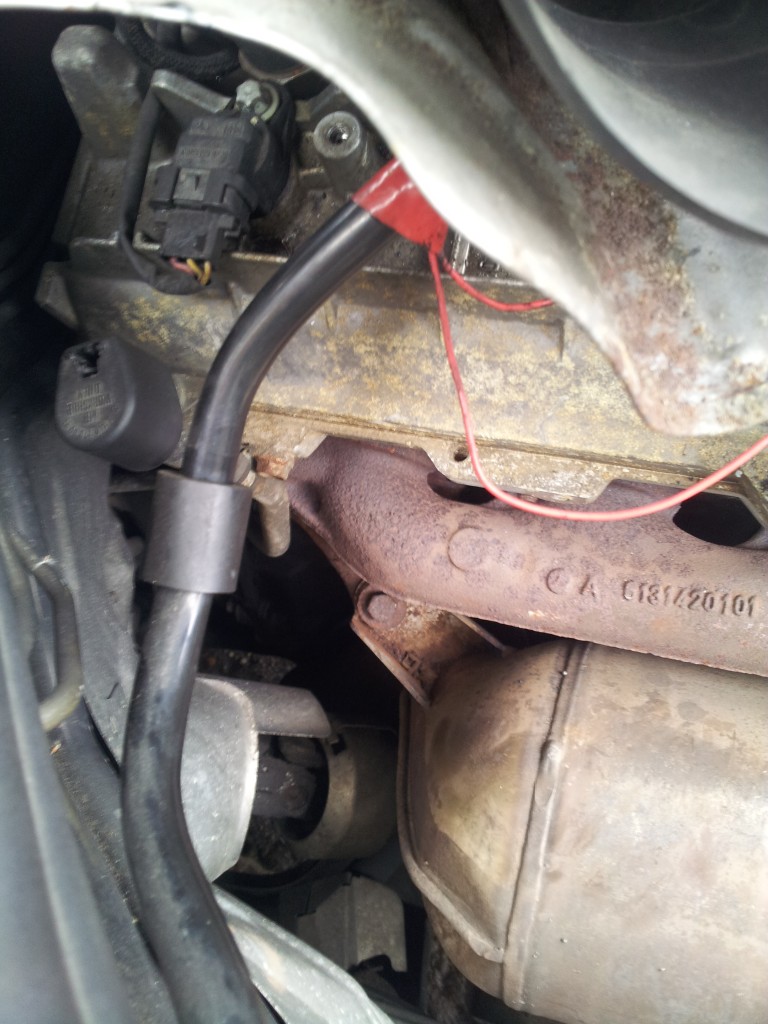 There is a clamp on the underside of the cat, where it joins the secondary cat pipe, I didnt take pictures of this, but all that is needed is to compress one side of the clamp, and then press the clip out of the clamp with a flat head screwdriver, The reverse is true to fit it.

With the cat removed, Its now time to break the cat up into pieces and empty the cat. I used a hammer and chisel to break it up and shook it. I also rinsed out the inside to ensure there weren’t any bits floating around in there.

You can just about the see the cell structure in this picture: 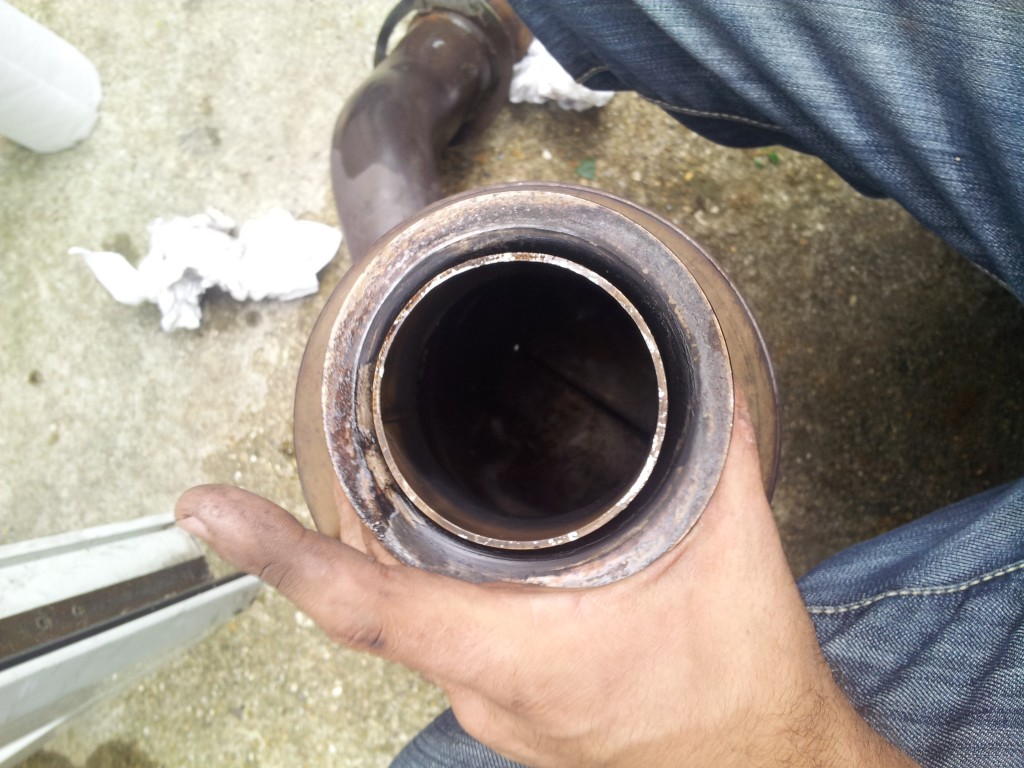 Its basically the reverse of the removal, ensure that all bolts are done up, it may be beneficial to grease the flanges slightly (but I didnt).

Here is the sound of mine after the De-CAT

You also get a little bit of a turbo hiss when you let off the accelerator. Can be heard at the end of the video.

Unfortunately my hissing is still there, so there is still a boost leak somewhere 🙂